Dr. Alan Dangour, the leader of the research team and principle author of the paper, said that “a small number of differences in nutrient content were found to exist between organically and conventionally produced crops and livestock, but these are unlikely to be of any public health relevance.”

The report further concludes that “because of the limited and highly variable data available…there is currently no evidence of a health benefit from consuming organic compared to conventionally produced foodstuffs.”

According to the FSA, who commissioned the London School of Hygiene and Tropical Medicine (LSHTM) to carry out the research, a “systematic review of literature” was conducted of all the papers published over the past 50 years that related to the nutritional and health differences between organic and conventional food.

Noticeably, the study does not include any data on pesticides, but the FSA explains this is because pesticides are already assessed and their levels are monitored, and that the use alone of “pesticides in either organic or conventional food production does not pose an unacceptable risk to human health.”

The FSA emphasises that the research reflects its commitment to “giving consumers accurate information about their food, based on the most up-to-date science.”

However, the report came under strong criticism from The Organic Center (TOC), an American-based NGO, which claimed the report “downplayed positive findings in favor of organic food.”

In a paper published in March 2008 a team led by the TOC’s Chief Scientist Charles Benbrook investigated whether organic plant-based foods have greater health benefits than those produced from conventional crops, and found that they are, “on average, more nutritious.”

The findings of the FSA study were welcomed by the European Crop Protection Association (ECPA), which represents crop protection industry interests at a European level. Friedhelm Schmider, Director General of the ECPA, commented: “This is great news for consumers,” and adding “that less expensive produce has been proven to be as nutritionally beneficial as pricier organic alternatives is a great benefit to cost-conscious shoppers.”

In a contrasting opinion, the International Centre for Research in Organic Food Systems, claims an organic diet may bring health benefits, based on the preliminary findings of a study on rats which suggests “that organic food may alter the immune status, sleep/activity pattern, accumulation of adipose tissue, liver function and vitamin E status, while traditional measures of nutrient value were unaffected by the production method of food (organic vs. conventional).”

In its official response, The Organic Center (TOC) argued that the research in the FSA study in fact supported the claim of greater health benefits from organic crops, as “significant differences cited by the team included nitrogen, which was higher in conventional crops”. The Center writes that elevated levels of nitrogen in food are “a public health hazard because of the potential for cancer-causing nitrosamine compounds to form in the human GI tract.”

TOC’s Chief Scientist Charles Benbrook and two colleagues, Donald Davis and Preston Andrews, write that the FSA review was “narrow” and the “more rigorous” review of the same literature by the TOC in 2008 shows advantages to organic crops.

According to the TOC team, the FSA study omitted a measure of total antioxidant capacity which has “great importance in promoting human health” and had a weakness in including older studies in its review, arguing “most studies published before 1980 were found flawed for purposes of comparing the nutrient content of today’s conventional and organic crops.”

The team further criticised the FSA’s study on the grounds that older data included had been rendered invalid, due to consistently increasing yields since the 1950s “leading to, in some cases, a dilution of nutrients”. The results of the FSA study are “likely confounded by the team’s decision to include data from over three decades ago.”

Tim Smith, Chief Executive of the Food Standards Agency, wrote an open letter to interested parties defending the findings of the study, stating that the study was “the most scientifically rigorous and independent review of research ever carried out in this area.” He blamed “irresponsible interpretation” for “misleading claims being made concerning higher levels of some nutrients found in organic food.” 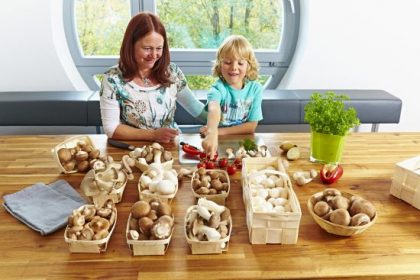